With 52 episodes over two seasons (2001-2004) the Justice League Animated Series was a critical and popular success and has spawned a great deal of merchandising over the years since its premiere.

The Eaglemoss figures — standing approximately five inches — are hand painted, metallic resin figurines on a base for easy display. Each character is packaged in a retro style blister pack and is accompanied by a 12 page magazine with content specific to that character.

Unlike many of the other DC licenses that Eaglemoss holds which seem to have an open-ended production schedule and dozens of figurines release, the Justice League collection is branded as a mini-series.

Our checklist includes all of the figures and which issue they were released with. Click on a character name to purchase your own figure. You can also find figures on eBay. 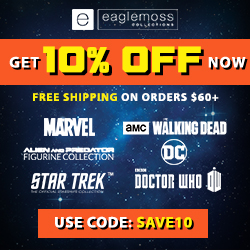